The Griffon Vulture Gyps fulvus, is one of the largest raptors in the Iberian Peninsula. This scavenger bird, nests in great cliffs on ledges and caves most of the time, in colonies that can accommodate dozens of nests. In Spanish they are called “Buitreras”. 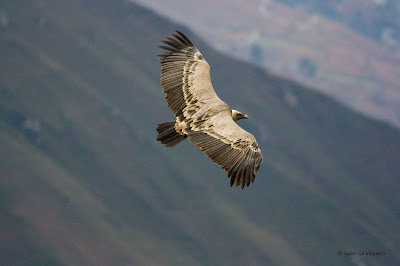 
In our environment, the most important areas for reproduction are located in the El Cuera Mountain Range Protected Area, the Peñamellera Peak and Picos De Europa National Park. 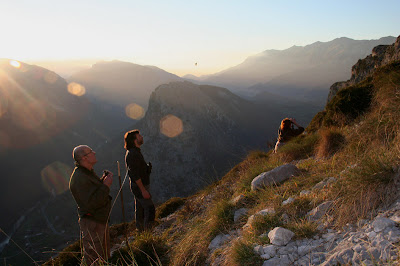 Birdwatchers in the Peñamellera Peak


In general, due to the large number of areas suitable for the location of their nests, the colonies are usually not very large. The bigger ones are around 6-10 nests.

The Aegyptian Vulture Neophron percnopterus is also a scavenger bird, but he´s able to catch little preys like little snakes, lizards and even little birds. Unlike the other vultures this is a migratory bird. He reproduces in the Iberian Peninsula, and spends winter in Africa. 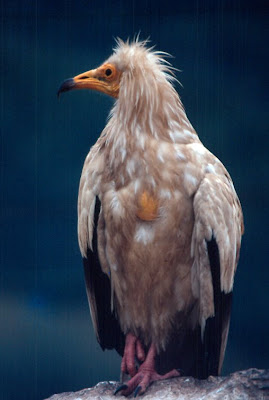 It is white with a black rim on the wings. It’s a little bit smaller than a Griffon Vulture and do not breed in colonies. Their nests are located most of the times in lonely holes on cliffs.

The Short Toed Eagle is a fantastic migratory raptor which it is specialized in catching snakes and lizards. They usually arrive to the Iberian Peninsula y march or April in small groups and from May to late September is not difficult to find them hunting in the south side of the mountains. Their most characteristic hunting method is to be static in the air, trying to find snakes. This is the best way to distinguish them.

But without any doubt the Golden Eagle is the queen of the skies in Picos de Europa National Park. They nest in big holes and platforms in inaccessible cliffs and are able to hunt small goats, ships, lambs, foxes, young wild boar, cantabrian chamois, ravens…etc.

The adults are pretty dark but the young ones have distinguishing marks in the wings and the tale. To observe a Golden Eagle hunting or carrying a prey to the nest, is probably one of the most unforgettable moments that can be shared in Picos de Europa National Park.

TOUR DESCRIPTION: From the accommodation we will drive to the small village of Oceño in the boundary of Picos de Europa National Park. From there we will walk calmly and slowly for a path in a very good condition during 2:30 – 3 hours. 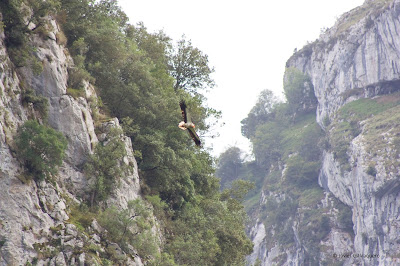 BIRD TARGET: In addition to the birds cited above, other birds that can be watched during the trip could be: Black Kite, Common Buzzard, Common Kestrel, and a big group of passerines like, Yellow Hammer, Rock Bunting, Red-Backed Shrike, Iberian Chiffchaff, …etc. 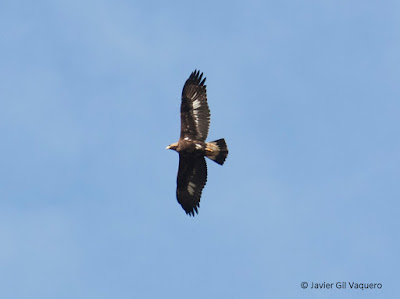 LENGTH AND CONDITIONS OF THE ITINERARY: Half Day in the morning or evening to be arranged between the guide and visitors.